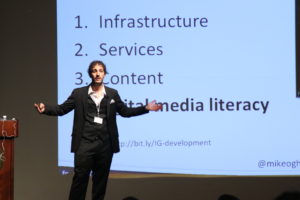 During MDLAB 2016, Michael Oghia explained how the internet is governed and regulated by governments, private sectors, and civil society and how this shapes the evolution and use of the Internet. Oghia also gave a thorough history of the internet and network architecture.

Michael Oghia received his MA from the American University of Beirut (AUB) and is a Belgrade-based Internet governance consultant & editor. He was chosen as a two-time Internet Society (ISOC) ambassador to the Internet Governance Forum (IGF), and is currently the communications manager for iGmena.

About the Author: System